The fruitful 2017 let even a greater number of consumers see at first hand how the Internet of Things works. The best IoT solutions have come to be a household name across the world. The IoT worldwide market size reached 194 billion US dollars and is predicted to grow up to 249.2 billion US dollars in 2018:

More than anybody, IoT software development companies know the IoT technology has already reshaped the world as we knew it. And all the technology-related are now wondering what more it got left in the tank.

Statistics predicts the number of IoT connected devices will grow to 1.2 billion in 2018. Let’s have a look at 7 undeniable IoT trends we set out below.

The IoT market size by industry shows the consumer electronics, automotive, healthcare & life sciences, industrial/manufacturing will be twice as large as in 2014. In this, such industries as energy & utilities, retail and construction/infrastructure will gain $890 B by 2020. 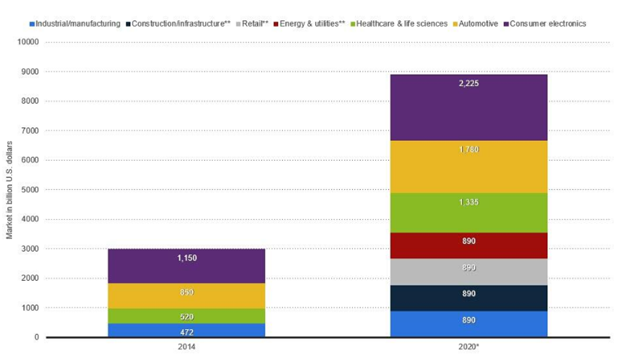 In line with the IoT innovations research by Growth Enabler, in 2018 there will be a continuous market growth. This will result in a fast increase in the number of IoT devices. Thus in 2018, the population of planet comprises 7.48bn2, where the number of connected devices will exceed 8.4bn1. All this thanks to the rapid adoption and increase of web-connected physical gadgets like self-driving cars, automated farms and industrial objects, interactive billboards and smart city environment.

The business-to-business segment is stated to involve the greater number of companies building the Internet of Things. Thus, $300+ B is projected to be generated annually by 2020 where more than $85 billion is to be performed by the industrial sector. 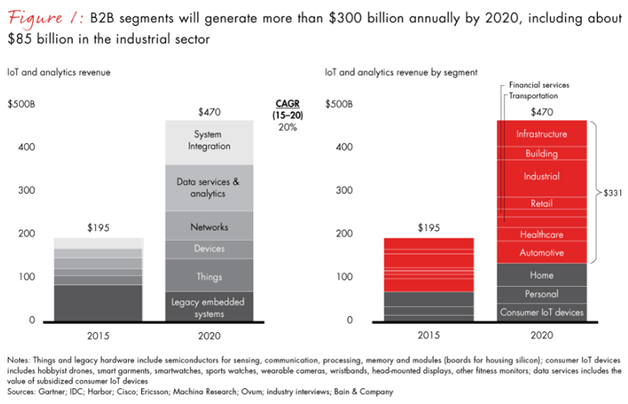 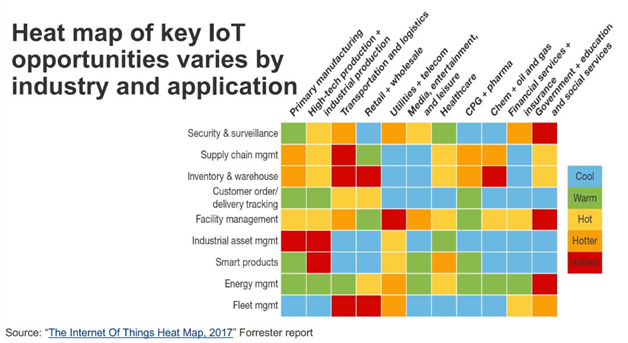 According to the latest KPMG’s research, the security rate will grow by 10 percent in 2019. The audit company has revealed security and privacy concerns are the key factors that affect decision-makers in choosing an IoT app development company. More and more companies are interested in the security of distributed IoT systems and of the applications that require a higher level of reliability, especially in the health industry.

Increasingly, developers are likely to increase the IoT current value stream and monetize the data collected by the connected devices. The potential of IoT systems is predicted to acquire the new spheres of the application within organizations. This will inevitably lead to the necessity of rethinking and rebuilt of business management models, as well as the call for the implementation of new IoT solutions.

The more companies are engaged in IoT development, the more unique approaches and solutions for IoT applications are adopted. And at the same time, each of the companies advances its own standards and protocols. This brings to a vast number of closed IoT systems, which can’t communicate with other devices.

EY expects the 5G mobile network to be implemented this year in the US. Though 5G is not projected to spread globally till 2020, the unified network is forecasted to support VPNs and redefine current wireless communication methods applied in the IoT sphere.

In line with the trend study by CXP Group, a number of companies are planning to increase their spendings on IoT up to 30%. Some of the companies expressed the wish to raise their spending up to 70% in comparison with the previous years.

Meanwhile, Gartner predicts more than 65 percent of companies will adopt IoT solutions by 2020.

Certainly, that’s not all. But as any other technology adoption in practice, IoT solutions increased actual deployment and continue expanding the spheres. With the growing number of IoT development companies, the system connective protocols need standardization and it feels real with 5G implementation. The path from an IoT project concept to its actual deployment has shortened, which allows for the output growth. Still, many companies don’t know for sure what IoT can mean for them individually or they don’t know how to start with the IoT projects. However, we already know more than 65% of companies are predicted to adopt IoT solutions by 2020. In general, today clear and fast benefits from the IoT implementation seem to become more important than the business transformation purposes pursued before.

5 of the Best Ways to Reach Your Customers in 2018

Centrinity Blog Provides Information and Tips about Business and Tech